On behalf of the committee, Mr. Uday Walia, President, The Oxford and Cambridge Society of India of the society is delighted to invite you for a discussion with Mani Shankar Aiyar, Ankita Mukherji and Bhavya Bishnoi. 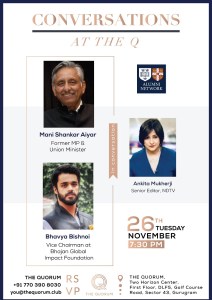 The Indian electoral process is nothing short of a miracle given the logistical and security issues surrounding the largest democratic process in the world.  Bhavya Bishnoi, who is only 26, was one of the youngest candidates for election in the last General Election.  He stood from Hisar, and sadly lost, but we thought it would be very interesting for us to hear about his experience first hand.  To compliment the discussion, we have also invited Mani Shankar Aiyar, a veteran out-spoken politician who has lost and won several elections in his varied career.  Ankita Mukherji has bravely agreed to moderate the discussion.

Bhavya was educated at the London School of Economics and the University of Oxford and played cricked for his university.  Bhavya is Vice Chairman at Bhajan Global Impact Foundation (BGIF), a think-and-do tank based in the national capital region of India that aims to tackle pressing social and economic challenges through strategic partnerships, community engagement, evidence-based research, and high-impact interventions.

Ankita is a Senior Editor at NDTV, she anchors the daily show, Newsbreak, and the Weekend Edition of NDTV’s flagship show, Left, Right and Centre.  She has also worked in publishing and read English at the University of Oxford.

Whilst both are members of the Congress Party, this is not meant to be a political discussion but one on the political process and we hope both participants will regale us with personal anecdotes and perhaps amusing apocryphal stories of the great Indian democratic juggernaut.

The event, is being hosted in association with The Quorum.

Please remember to RSVP so we can reserve a place for you as we expect the discussion to be very well attended.